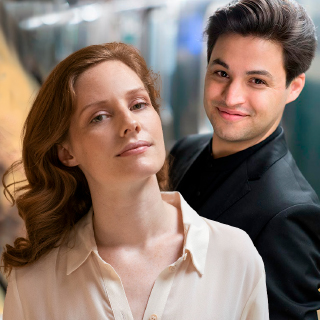 Violinists Tosca (Dutch) and Asi (Israeli) illustrate how music connects like nothing else. They met in New York, where they both studied at the Juilliard School of Music. Their mutual love for music initially drew them to each other, and now they are married as well. The fact that Tosca gives concerts with Asi is really not because of his beautiful eyes, but rather because he is a phenomenal violinist!

Asi is hailed as one of the greatest talents of his generation. As a 14-year-old he made a sensational debut with the Israel Philharmonic Orchestra conducted by maestro Zubin Mehta. This success was immediately followed by another invitation from Mehta to perform with him in the following season and marked the start of his international career.

The Ukrainian pianist Victor Stanislavsky emigrated to Israel at a young age, and there quickly became one of the most remarkable pianists. So it's no surprise that Victor and Asi have regularly shared the stage as a duo. And Tosca and Victor are no strangers to each other either. They gave several concerts together, including a concert at New York's famous Carnegie Hall.

Camille Saint-Saëns *
Sonata for violin and piano No. 1 in D minor, Op. 75