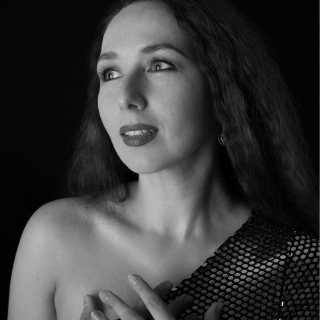 Come along with The Voice that travels to distant times and places, beyond national borders and religions.  From Italian odes to flowers and love, through Viennese farewell kisses and a dizzying spinning wheel, to Russian wailing about maddening seduction, including boiling jealousy and lips melting together.

Unknown gems from The Netherlands and France are combined with favourite audience hits such as the Ave Maria and a Brazilian Aria. Also notable are the Akhmatova Songs for soprano and cello by the British composer John Tavener, who was drawn to the mystical. He wrote this work on six poems by the highly-regarded Russian modernist poet Anna Akhmatova, who did not have an easy life as an activist under the Stalinist regime.

Go on a wondrous journey together with the soprano Gulnara Shafigullina, pianist Tobias Borsboom, and cellist Pamela Smits ("They enchant with their playing. Two poets of the keys and strings have found each other." - Westdeutsche Zeitung). The Russian star soprano also literally shines with her voice across many borders (Metropolitan Opera New York, Mariinsky Theater St. Petersburg, London Philharmonia Orchestra.)

The Voice on a Journey
Giulio Caccini
Amarilli mia bella, for soprano and basso continuo