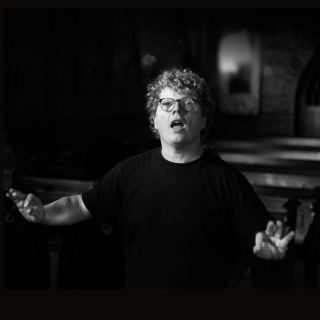 This program focuses around the Holy Spirit, north and south of the equator. We start with church music from the northern hemisphere and after the intermission we descend to the southern hemisphere, where the Argentinians will make their appearance in festive exuberant “party dancing” style. We end this spectacular evening with a famous Creole mass; the Misa Criolla.

Before this we hear the cerebral musical embodiment of the Holy Trinity from Christianity. Colourful scenes from the Christmas story with an ode to the Virgin Mary, a journey into a starlit night, and popping champagne corks. Tavener wrote the extraordinary work Svyati for cello solo and choir on texts of the Russian Orthodox Church. The choir sings as the coffin is closed and borne out of the church, followed by the mourners with lighted candles, while the cello represents the embodiment of the Ikon of Christ.

After the break it's party time! Also the centenary of the birth of both Argentine composers Piazzolla and Ramírez would have been celebrated in 2021, but was plowed under by the pandemic.

The Argentine Criollos are a mixture of many peoples such as Europeans, Africans, and Indians. In the Misa Criolla, composer Ramírez uses the cheerful and melancholic rhythms of the Criollos and the instruments from the Andes Mountains, such as the charango (small guitar) and the quena (Andean flute). The Huygens Vocal Ensemble are now experts in the Misa Criolla and Argentinian folk music. It is also noteworthy that Javier Rodríguez is the last permanent solo tenor in the ensemble of Ariel Ramírez, performing the Misa Criolla many times. Will you celebrate Christmas with us?

John Tavener
Svyati 'O Holy One', for solo cello and choir a cappella